“Hunter’s Season” is definitely the best out of the Elder Races novellas. While I thoroughly enjoyed all the others, my biggest complaint always centered around how the main plot was handled. The other novellas had fairly large plots and felt like they really should have been full length titles. The result was intricate plots getting wrapped up too easily (“True Colors“), left feeling unfinished (“Natural Evil“), or feeling extremely rushed (“Devil’s Gate“). Luckily, that wasn’t the case here. END_OF_DOCUMENT_TOKEN_TO_BE_REPLACED

Lord’s Fall is book 5 in Thea Harrison’s Elder Races series. Having read this book, I am officially all caught-up with this series. Originally, I had no intention of reading Lord’s Fall, but after enjoying Pia Saves the Day, I decided to give it a shot.

Newly mated couple, Pia and Dragos must divide and conquer if they hope to make amends with the elves and find two replacement sentinels for the Wyr demesne. Since Dragos is the reason for the elves hostility, it’s Pia who takes on the peace mission. Issues arise when someone gets their hands on a god machine and goes on an elf murdering/possessing spree.

Honestly, this was boring. Harrison is at her best when she concentrates primarily on relationship conflicts between people. When she focuses too much on political conflict, or tries to build-up to a war, it doesn’t work for me. Things always seem too easy for the protagonists when she goes for the political/war plot. This was the case here since the minute Dragos reconnects with Pia , I knew how the rest of the story was going to play out. There were no real surprises and the characters barely had any struggles.

What kept me reading were the brief flashes of conflict between the characters. I liked seeing Pia and Dragos struggle for balance in their relationship and Pia shakily begin to trust her guards. However, it wasn’t enough to make me interested in reading about the couple any further than this.

Unless you really adored Pia and Dragos in Dragon Bound, I wouldn’t recommend Lord’s Fall. 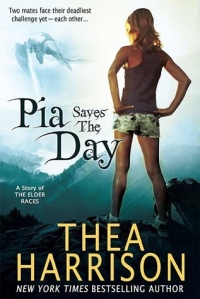 Oracle’s Moon is book 4 in Thea Harrison’s Elder Races series. When her sister died, Grace inherited the family’s Oracle powers along with her sister’s two young children. Grace can barely afford to keep the children fed and hates having powers that constantly bring people to her door asking for something. On top of this, she has to deal with the Dijinn, Kahlil, constantly materializing in her house expecting that she’ll recognize his presence as a gift.

I was thrilled with how much I loved this one since the previous two books in the series didn’t really work for me. Grace was definitely the highlight of this story. She was strong, independent, and not bitter about the new direction her life has taken. Most of all, I loved that Grace never let Kahlil run roughshod over her. She had enough sense to recognize that his help could be beneficial, but didn’t blindly follow his wishes.

My only issue with the story was that I didn’t quite understand why Kahlil and Grace were attracted to each other. The romance evolved quickly in the last half of the novel, which threw things out of whack. The first half of the story had a slow burning attraction between Grace and Kahlil. I adored this and could’ve seen it eventually turning into love. However, at the halfway mark their relationship went into hyper-drive and suddenly they were confessing love for each other. I would’ve been happy if Harrison had left their relationship at the attraction stage with the potential for something more and just planned to explore Grace and Kahlil as a couple in a future book. This also would’ve had the bonus of letting Kahlil’s character mature a bit more to the point where it would be believable that he would pursue a relationship with Grace.

Despite this, I still really enjoyed the story. I’m hoping that eventually Thea Harrison goes back to re-vist this couple (I’m so tired of Pia and Dragos) in a future book.

I love Thea Harrison’s Elder Race’s series because the world building and unique mythological characters featured in the books are a breath of fresh air to paranormal romance genre. Unfortunately, Kinked (the sixth installment in the series) didn’t work as well as the previous books for me.

The story follows Aryl, a harpy and Wyr Sentinel, as she is forced by her employer to go on a mission with the newest Sentinel, Quentin. For months, Aryl has been convinced that Quentin has nefarious reasons for becoming a Sentinel and she has made it her life mission to uncover whatever he is plotting. Aryl’s obsession and Quentin’s mutual antagonism toward her has driven everyone insane. When their employer loses his temper he gives them an ultimatum before sending them on the mission; learn to play nice or else.

Typically, if I couldn’t get into the relationship at the center of an Elder Races novel, this wouldn’t be a huge problem for me as usually the main plot is enough to keep my interest. Unfortunately, that wasn’t the case here as the plot didn’t start gaining ground until the second half of the book. Instead the first half concentrates on Aryl and Quentin’s long hike/camping trip towards their destination where the main source of conflict is them hating each other or having sex. So, not being interested in their relationship, this section of the story dragged a lot. Luckily, the plot started picking-up in the second half of the story with a mystery involving shadow wolves and a witch. All in all, this would’ve been a more engaging story if the first half of the book hadn’t been watching Quentin and Aryl traveling or if, while traveling, they had conflicts outside of themselves that they needed to deal with. Instead, it’s about 100 pages of watching them bicker or molest each other while hiking.