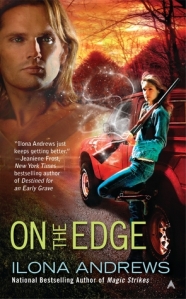 I’m really glad that I didn’t start the Edge series with On the Edge. The hero, Declan, is the first of Andrews’ heroes who just did not work for me. He was a little too much of jerk and never showed any real change in mentality from spoiled rich boy. This especially came out in his reactions toward the heroine, Rose.

Rose has been targeted ever since she flashed white at her graduation ceremony. Flashing is, essentially, an emission of magic that can be controlled and used as a weapon. Different colors signify how much power a person has, with white being the strongest. People who can flash white are extremely rare, so when Rose showed off her flash she unintentionally marked herself as a conquest for noblemen who want to strengthen their bloodlines. Living in “the Edge”, Rose is looked at as an easy victim, so she’s been dodging kidnapping attempts for years. At the same time, she’s also been raising her two younger brothers and working at a crappy job since her father abandoned them. So she really has no time to cater to Declan, the arrogant nobleman who shows up on her doorstep. END_OF_DOCUMENT_TOKEN_TO_BE_REPLACED

October was a pretty good reading month for me. Below is a breakdown of what I read last month but didn’t have time or the inclination to write a full review for:

Wolverine and the X-men, Vol. 1 by Jason Aaron

Wolverine and Kitty Pride are trying to pass inspection so they can open the Jean Grey school for mutants. As expected, things don’t go well when the new Hellfire Club (teen edition!) decides to attack. I loved the dynamic of Wolverine and Kitty trying to play nice with the bigoted inspectors while also attempting to keep the school in one piece as things crash down around them. It was a great set-up for a little more light-hearted X-men series and I can’t see where things go.

Captain Marvel: Down starts out with a fun plot involving Carol and Monica Rambeau investigating an unexplained ship/plane graveyard near New Orleans. This was just straight-up fun that features Carol punching sharks and flows into a story about Carol trying to find a missing friend. Really enjoying DeConnick’s Captain Marvel run. One of the best things is that Carol is allowed to have female friends who genuinely enjoy one anothers’ company. This is harder to find in comics than some would think.

After 4 years of waiting, fans of Armstrong’s Nadia Stafford series finally got a conclusion to the series. In Wild Justice, Nadia finds herself face to face with the killer of her young cousin and is forced to confront her memories of the past. I love the Nadia Stafford series, so I was extremely relieved when this book got released, as I knew it would wrap-up questions from the previous books. However, some things in this novel seemed like they were on fast-forward. I got the feeling that Armstrong had originally intended to have more than 3 books in the series but then changed her mind (either due to her other stories being more popular or a loss of interest in the concept) and decided to cram everything into this one. Despite this, I still really loved Wild Justice and thought it was a strong ending for the series. But I am still holding onto the fragile hope that maybe someday Armstrong might decide to give us another book featuring Nadia. 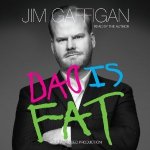 Dad is Fat by Jim Gaffigan

I listened to Dad is Fat on an 8 hour road trip. Gaffigan’s delivery of the book was pretty fantastic and there were moments in the book that had me chuckling to myself. However, I mostly left book thinking Gaffigan was absolutely insane. Live on the fifth floor of a two bedroom apartment in New York with 5 kids, your spouse, and no elevator? No, thank you. .

Avengers: The Enemy Within by Kelly Sue DeConnick

The Enemy Within is actually the conclusion to plot started in Captain Marvel: Down. If you haven’t read that one, you won’t be able to follow Enemy Within very well as it wraps-up the mystery behind Carol’s illness and the person that has been stalking her, which was not really seen in DeConnick’s Avengers run prior to this. Despite this, it was a great conclusion to that story arc and I look forward to see what comes next.

Wolverine and the X-men, Vol. 2 by Jason Aaron

I hate mystery pregnancy plots and even though it’s made clear that Kitty isn’t actually pregnant (not a spoiler, it’s revealed within the first couple of pages) this came way too close to that kind of story. The resulting plot centered on her and the invasion of the school was boring to me. What made up for it was Wolverine and Kid Omega going gambling in space to save the school. I hear that the next couple of installments of this series aren’t the greatest, but I’ll probably continue on with it anyway.

The Martian by Andy Weir

A great listen on audio. I posted a full review on a blog I share with a friend of mine, which can be found here.

Steel’s Edge is supposed to be the last book in Andrews’ “The Edge” series. Charlotte moved to the Edge after her illusions about her husband and life were shattered. She worked hard to build a new life for herself but it’s all destroyed one afternoon when she agrees to help an injured man. Now she’s set on taking her revenge and will use Richard Marr’s help to get it. I really loved Charlotte and thought the dynamics of her magic were interesting. However, I felt like there were a few minor plot threads that weren’t finished by the end. So, I’m hoping this means the Andrews writing team haven’t completely finished writing stories in this world.

Evernight is the 5th book in Kristen Callihan’s “Darkets London” series. I’ll admit I skipped over book 3 and 4 for no real reason except this one sounded more interesting at the time. Holly Evernight has been agoraphobic ever since she was kidnapped and held captive. And the constant stream of supernaturals bent on killing her isn’t helping alleviate that fear. Will Thorne is the first one person to make it past her security and she’s shocked to find he’s also someone she was forced to experiment on. I’m not a huge fan of “hate turns to love” romances, so the first part of this book wasn’t my cup of tea. Callihan’s writing was enough to keep me going though and I new that the ending wouldn’t play out the way I expected. It’s one of the things I love about Callihan’s books. She never quite goes down the path I expect her to take. All in all, an enjoyable read and I look forward to reading the next book in the series (Soulbound).

Dark Water was my horror novel for October. Essentially, it’s a collection of short stories all connected through the characters’ interactions with water and death. The way Suzuki incorporated paranormal elements into these connections was very interesting and was what kept me reading. However, I was thinking this would be more of a horror book than it really was. The majority of the tales reminded me more of Karen Russell‘s short stories, which are general fiction that utilizes some paranormal elements. So, if you’re looking for a scary or creepy read, I would suggest you look elsewhere. But if you’re looking for a collection of interesting stories then this is a solid read.

Garment of Shadows is the 12th installment in King’s Mary Russell series. I’ve been skipping around a lot with these books but it has never affected my understanding of what is going on. In this one, Mary is suffering from amnesia while trying to navigate her way around a strange city. A large chunk of this book revolves around everyone trying to figure out how Mary got injured and where the person she was traveling with has vanished. I really adore this series and loved getting some chapters told from Holmes perspective.

It Happened One Wedding by Julie James

It Happened One Wedding is the 5th book in James’ FBI/US Attorney series and I really wish she’d get away from writing only books in this series. I’m starting to get a little tired of the concept and would love to see what she would do outside of FBI/US Attorney novels. In this story, Vaughn and Sidney are the best man and maid of honor (respectively) of their siblings wedding. After a rocky start, they find themselves growing on one another. Nothing too surprising here, it basically went the way I figured it would. Not bad, but nothing very memorable about it.

After being disappointed by the first book in Ilona Andrew’s Edge series (On the Edge), I went into Bayou Moon with some hesitation. Luckily, the things that annoyed me in On the Edge (mostly the overbearing and overly powerful male protagonist) were not present here. In fact, it seems like the Andrews’ writing team have found their footing with this installment. Bayou Moon is rich in world building, includes some intriguing new characters, and has quickly become one of my favorite books.

Cherise Mar’s parents have gone missing, leaving her in charge of an extended family group and their estate. In a race to get back home with some much needed paperwork, Cherise runs into William, a wolf shifter. William has been hired to discover what a notorious killer is searching for and turn it over to an elite intelligence agency calling itself the Mirror. As luck would have it, what the killer is seeking has something to do with the Mar family. So, William and Cherise must work together to stop the killer from cutting a bloody path through the family to get what he wants.

I really loved the atmosphere of Bayou Moon. Andrews’ dedicated a lot of time to building the world of the Edge and the part we see throughout this story is reminiscent of hardcore Cajun country. It’s a very swampy, remote, and muddy setting that the characters are working with, which is one of the favorite types of atmospheres.  The downside to this is that at times it slowed down the pacing of the story down at times as there were a lot of details that needed to be covered about the general set-up of the world and understanding the Mar family dynamics. At the center of all the action is William and Cherise who are trying to deal with holding off a killer and settling some bloody family feuds.

One reason why I always love to pick-up an Andrews book is because I know the heroine will be well-rounded and dynamic character. Cherise was not a disappointment on this front. She handles all the chaos thrown at her with as much sanity as she can but still has justifiable worries, mistakes, and breakdowns throughout the story to make her human. One of the things thrown in her path is William who is a wolf shifter. In this universe shifters are looked at as unstable and often prosecuted just for existing. So, William tries his best to hide what he is from those around him in fear of being hunted down. The way Andrews writes William is one of the highlights of the story for me. There’s something slightly off about his mannerisms and how he just can’t seem to completely grasp all the nuances of normal social interactions that makes him fascinating.

All in all, a really fantastic read and I can’t wait to pick-up Fate’s Edge, the next installment in the series.