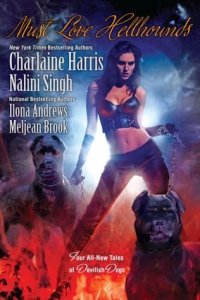 The Brittingens Go to Hell by Charlaine Harris

Rating: N/A
Didn’t read this installment in the book. I’ve tried to read Harris in the past but could never really get into her. So I decided to skip this one.

Rating: A-
This is a short prequel story to Singh’s Guild Hunter series. It features Sara Haziz right before she decides to accept the Guild Hunter director job. Its basically a “how they met” story about how Sara and her husband, Deacon, got together. I loved this story.

Sara and Deacon are assigned the job of finding out who is behind a spurt of vampire slayings in the area. Signs point to it being a hunter who has gone rogue. However, things begin to get complicated when one of the archangels decides to test the potential new guild director.

Like most of the things I’ve read from Singh, this was pretty fabulous. However, places felt a little rushed. Singh had several good plot threads going that could’ve easily carried a longer story. Great installment for fans of the series. END_OF_DOCUMENT_TOKEN_TO_BE_REPLACED

Wild Invitation is a collection of 4 stories set in Singh’s Psy-Changling world. The first two had been previously published in An Enchanted Season and The Magical Christmas Cat, but the last two were new for this collection.

Beat of Temptation is set before the first book in the series, Slave to Sensation. DarkRiver’s pack healer, Tamsyn has been waiting years for her mate, Nathan, to fully claim her. Unfortunately, he seems intent on making her wait indefinitely. I love this short story. It hits all the right angst levels for me and I enjoyed seeing younger versions of some of the characters from the main books. END_OF_DOCUMENT_TOKEN_TO_BE_REPLACED

Tangling with the Tiger is the fifth book in Vivi Andrews Lone Pine Pride series.

Lieutenant Grace Calaveras has the misfortune of being assigned to crazy tiger shifter, Dominec Giroux. Dominec is ticking time bomb and it’s her responsibility to make sure no one in their Pride gets caught in the explosion. After being held captive and tortured, Dominec’s only concern is exacting revenge…no matter the cost. END_OF_DOCUMENT_TOKEN_TO_BE_REPLACED

Fox shifter, Chloe, has been pining after Jim Woods for four years. After nothing but constant rejection, Jim is finally ready to admit to the bond he shares with Chloe. There’s nothing standing in their way now, except a barrage of hunters and mercenaries targeting Chloe.

Dana Marie Bell is great at getting you invested in the side characters who populate her stories. So, after seeing all of Jim and Chloe’s angst in the previous books, I was pretty excited about reading their story. Unfortunately, I was a little let down by the direction their book took. END_OF_DOCUMENT_TOKEN_TO_BE_REPLACED

Top Ten Tuesday is a weekly meme hosted by The Broke and the Bookish. This week’s theme is a Freebie week!

*Any descriptions in italics are from the back covers.

Elena Michaels finds herself drawn back into the Pack she left behind when rogue werewolves begin hunting its members. Despite the past betrayals, Elena can’t turn away from her surrogate family and is forced to confront things she much rather have left buried.

I adore this book. It’s filled with action, grit, and some interesting werewolf mythology. I loved that there are real consequences to being a werewolf. I would highly recommend this to people looking for an awesome werewolf read. 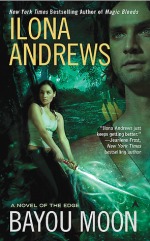 The world has been fractured in half. On one side magic runs rampant, on the other lies a world where magic cannot exist. The Edge lies between these two worlds and is an odd mix of the two. It’s a place where people like wolf shifter, William, go to hide. William unwittingly finds himself drawn into a political battle and must team-up with Cherise Marr if he hopes to stop a killer from cutting a bloody path through the territory.

This is one of my favorite Ilona Andrews books and that’s saying something because I love just about everything they write. If you love deep south settings and a bit of political intrigue, in your Urban Fantasy, then this is for you.

Anna Moder has just witnessed a shooting, seen her car pulverized, and rescued a wounded stranger only to discover he’s really a werewolf. And by her recent standards, things are actually looking up. Lycanthropes don’t faze Anna. Doctoring a wolf pack outside Grundy, Alaska, is the closest thing to home life she’s known in years. But hitching a ride to Anchorage with long-absent pack member Caleb Graham that’s a risk.

Love road trip books? Looking for a light and funny werewolf book? Then this is for you. There’s no need to have read any of the previous books in the series to follow along with this one.

END_OF_DOCUMENT_TOKEN_TO_BE_REPLACED 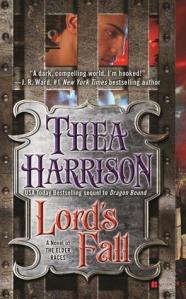 Lord’s Fall is book 5 in Thea Harrison’s Elder Races series. Having read this book, I am officially all caught-up with this series. Originally, I had no intention of reading Lord’s Fall, but after enjoying Pia Saves the Day, I decided to give it a shot.

Newly mated couple, Pia and Dragos must divide and conquer if they hope to make amends with the elves and find two replacement sentinels for the Wyr demesne. Since Dragos is the reason for the elves hostility, it’s Pia who takes on the peace mission. Issues arise when someone gets their hands on a god machine and goes on an elf murdering/possessing spree.

Honestly, this was boring. Harrison is at her best when she concentrates primarily on relationship conflicts between people. When she focuses too much on political conflict, or tries to build-up to a war, it doesn’t work for me. Things always seem too easy for the protagonists when she goes for the political/war plot. This was the case here since the minute Dragos reconnects with Pia , I knew how the rest of the story was going to play out. There were no real surprises and the characters barely had any struggles.

What kept me reading were the brief flashes of conflict between the characters. I liked seeing Pia and Dragos struggle for balance in their relationship and Pia shakily begin to trust her guards. However, it wasn’t enough to make me interested in reading about the couple any further than this.

Unless you really adored Pia and Dragos in Dragon Bound, I wouldn’t recommend Lord’s Fall.