Suicide Squad, vol 3: Death is for Suckers is the most disjointed volume in the series. I finished it yesterday on the bus, but I’d have a hard time giving you a coherent summary of what happens, except that there was a lot of fighting.

Nearly every page in this collection had characters just wailing on each other. The small bits of plot included were pretty vague and only served as an excuse for more fight scenes. At the beginning, there’s a semi-interesting story involving the Joker returning that ties in to the Death of the Family arc. But that was fairly short lived and mostly just an extended scene of Harley and the Joker beating each other to a pulp. It was also annoying because we’re told that Harley Quinn was only brought into the team as bait to get the Joker out of hiding. Seriously? The one female on the squad was only included because they wanted her boyfriend? If I hadn’t heard how much better this series gets in volume four, I definitely would have given up on it at that point. From there, the story devolves into more random fight scenes while the team tries to recover a “package” for Waller. END_OF_DOCUMENT_TOKEN_TO_BE_REPLACED

When I heard that Paul Dini was the writer for the Gotham City Sirens series, I was ridiculously excited. I have nothing but fond memories of the 1992 Batman: The Animated Series cartoon, which he was one of the writers for. Unfortunately, I forgot that he wrote the awful episode where Harley Quinn and Poison Ivy become gal pals and start living together. After reading this comic, I went back to watch the episode and had to roll my eyes at Poison Ivy’s character (who spends most of her time spouting straw feminist ideologies). Basically, if you loved that episode from the show then you’re going to adore this comic series. Gotham City Sirens: Songs of the Sirens features Catwoman, Poison Ivy and Harley Quinn who are roommates trying to live “normal” lives.  END_OF_DOCUMENT_TOKEN_TO_BE_REPLACED 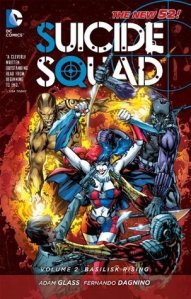 Suicide Squad: Basilisk Rising picks-up in the aftermath of Harley Quinn’s jaunt through Gotham to retrieve what was left of the Joker. Deadshot is dealing with the emotional trauma of what Harley did to him and the rest of the team is getting crushed under Amanda Waller’s thumb for various reasons. When new information on the Basilisk organization comes to light, Waller recommissions everyone to help bring its leader down.

The first volume (Kicked in the Teeth) focused mainly on Deadshot with the government portrayed as an underlying antagonist, willing to use convicts as expendable resources. Where I had issues with the astounding amount of cliches in the first volume, it at least had direction. Here… I’m not sure what they were trying to do. END_OF_DOCUMENT_TOKEN_TO_BE_REPLACED

Suicide Squad: Kicked in the Teeth centers on a group of villains unleashed to do the government’s dirtier assignments for a shorter prison sentence. To keep the team under control, each member of the squad has a nanite bomb injected in their necks. Problem with villains, such as Harley Quinn, Deadshot, El Diablo, Black Spider and King Shark, is that sometimes a death threat isn’t enough to keep them in check. END_OF_DOCUMENT_TOKEN_TO_BE_REPLACED