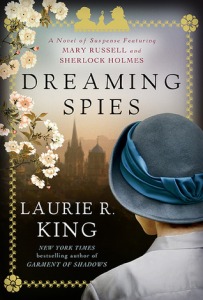 Dreaming Spies is the 13th Mary Russell book by Laurie R. King. It’s a frame narrative, where the beginning and end of the novel act as a bookends to a flashback story.

Mary Russell returns home one evening to find Sato, an old friend from Japan, bleeding in her kitchen. As Sato describes the circumstances that brought her to England, Mary discovers that the blackmail case she worked on with Holmes in Japan may not be entirely closed. Now, they must work to unravel what happened in Japan before a public figure is forced to comply with the extortioner’s demands.

One of the things I really love about the Mary Russell series is how often the stories are set outside of England. It’s always a lot of fun to see both Mary and Holmes stumble their way across an unfamiliar country while trying not to stick out like sore thumbs. However, I sometimes miss the cozy atmosphere England tends to have in these novels. So, I was pretty thrilled to find that this book had a good mix of both worlds. The beginning and end take place in England with Mary firmly in her comfort zone as she investigates, while the middle of the story is set in Japan.

As always, Mary is a wonderful character and I love seeing the quiet relationship she has with Holmes. However, Mary’s first person perspective didn’t work well for this book. Dreaming Spies is primarily the character Sato’s story. It’s that character who drives the majority of the action and influences the outcomes of the mystery. Mary and Holmes’s actions, unfortunately, do very little to influence the plot. I think they both could’ve been removed from the story entirely and the whole affair would’ve ended the same way. This was incredibly frustrating as Mary was regulated to pressing her face against the glass as she watched the main action of the flashback and present day stories unfold.

Despite this, I still enjoyed following Mary and Holmes on another of their adventures and in a new setting. I only wish Mary had more influence on the plot as the story often dragged since she was regulated to the role of mere observer. If you’re a fan of the series, I strongly recommend picking this one up. If you’re wanting to try a Mary Russell book, then I suggest you start with A Monstrous Regiment of Women.

Advance Reading Copy provided by Edelweiss in exchange for an honest review.

My Reviews for Other Books in the Series: