It was incredibly hard to narrow this down to just 10 episodes. There are so many that I love. However, I tend to lean toward the humorous “Monster of the Week” ones. So, here’s my list of best X-Files episodes, in no particular order:

One of the few X-Files episodes that actually creeped me out.

While on their way to a conference, Mulder and Scully hit a roadblock and join the search for a hunter who mysteriously vanished in the woods. As they investigate, their search team is slowly picked off one by one.

I have a deep affection for the episodes written by Darin Morgan. I love the setting of this one and the humor is spot on.

Mulder and Scully travel to a town that’s populated by circus performers during the “off-season” to investigate the death of a performer.

This one is a send-up to the old universal horror movies, which I have a deep affection for. I loved the tone, the odd town folk and that the story is set to various Cher songs.

Mulder drags Scully along as he investigates the case of a woman claiming to have been impregnated by a mysterious creature.

I tend to lean more toward the humorous episodes, but I really adore this one. It’s incredibly well done, especially how Scully’s grief is dealt with. I also love that it’s a Scully episode that doesn’t concentrate on pregnancy, infertility or some struggle with a previous lover/hook-up.

After the sudden death of her father, Scully struggles with an investigation that deals with a  convict on death-row who claims to be psychic with a link to her dead father.

A really early episode in the series. This is a great one for how isolated it is. I loved the trapped and almost claustophobic atmosphere and extreme paranoria that begins to kick in.

Mulder and Scully are assigned to investigate the deaths of an Alaskan research team. When they arrive at the camp, they find themselves stranded in a storm with an unknown virus that has the potential to cause the group to go insane. 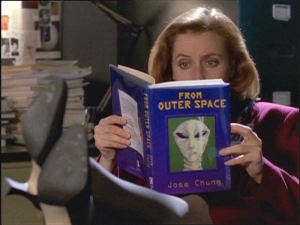 Another Darin Morgan episode. This is fun for seeing the same story through a bunch of different eyes.

A novelist looking to write a book about one of the cases Scully and Mulder has investigated, talks to Scully about her account of the case. Things are muddied, however, because all the witnesses have different accounts of what really happened.

This is an episode I really love, but can’t quite put my finger on why. Maybe because it gives a glimpse of the cases Mulder investigated before the X-Files.

A child killer that Mulder helped catch years ago, claims that one of his victims was Mulder’s missing sister.

Another episode where the same story is told from different perspectives. What’s fun about this one is seeing Mulder and Scully’s different interpretations of each other.

Mulder and Scully have to get their stories straight when Mulder stakes a teenager believing he’s a vampire.

This one is a little creepy as well and I love how open the ending is.

Mulder and Scully travel to a small town to investigate the death of a teenager who appears to have died during some kind of occult ritual.

Another episode that is just straight-up fun.

Several births of babies with tails, pulls Mulder and Scully into an investigation to figure out who the father is.