Immortal in Death is the third book in J.D. Robb’s In Death series. After reading this one, I’m thinking about skipping a few books ahead to read some of the later ones in the series. These first few books are OK, but I’m not enjoying them as much as I did the later book I read.

In this one, Eve Dallas is faced with a case that hits too close to home. Her best friend, Mavis, is the prime suspect in the brutal murder of a super model. All the evidence points to Mavis being the killer, but Dallas is determined to do everything in her power to prove she’s innocent.

One of the best parts of this book is that we have less Roarke than in the previous two novels. While this might be a downer for some, I’m not a fan of the man, so it was a huge positive for me. END_OF_DOCUMENT_TOKEN_TO_BE_REPLACED

I was pretty content to skip around in this series, since each book works well as a stand-alone. However, after reading Glory in Death, I was really flummoxed by Eve’s relationship with Roarke. I didn’t understand why she was so invested in a barely six month old relationship with a man who was manipulative and overbearing. It didn’t seem to fit with her character. So, I decided to go back and read Naked in Death in the hopes it would get me on board with the relationship, which had so far only baffled and often annoyed me.

In Naked in Death, Eve Dallas is tracking down a serial killer who is preying on prostitutes. All roads seem to point to the wealthy Roarke as the lead suspect, but Eve is skeptical. END_OF_DOCUMENT_TOKEN_TO_BE_REPLACED 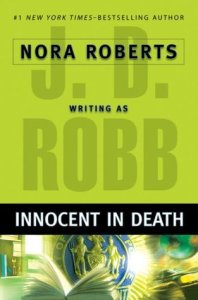 Innocent in Death is number 24 of J.D. Robb’s “In Death” series and my introduction to the books.

It’s the year 2060 and lieutenant Eve Dallas has taken a case involving a young teacher’s murder. The case seems like a standard poisoning, but Eve is having trouble building a good list of possible suspects. The young teacher seemed honestly well liked in the community with no real enemies. On the home front, Eve is battling her own insecurities as an old flame from her husband’s, path has suddenly returned. END_OF_DOCUMENT_TOKEN_TO_BE_REPLACED