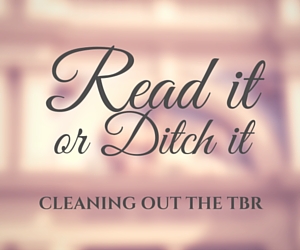 “Read it or Ditch it” is a new weekly feature I’ll be doing each Monday on the blog. The goal is to force myself into making a decision regarding some titles on my TBR pile. Each week I’ll select a book that has sat unread on my shelves for longer than a year and ask the question “Read it or Ditch it?”. If I still want to read it, then by posting it here I’m claiming that I’ll read it by the end of the year. If I’m no longer interested in the book, then this is a send off to the title since I’ll either be donating or selling it.

At the end of the year, I’ll do a round-up post to see how I did. If there are any titles that I said I’d read, but still didn’t, then I’ll either donate or sell those. Hopefully, doing this will help me reach my goal of only 100 books sitting unread on my TBR pile by the end of 2016. 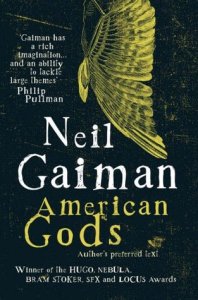 American Gods
Author: Neil Gaiman
Published: 2001
Genre: Fantasy
Length of Time on TBR Pile: About 7 years.
Read it or Ditch it?: Ditch it

I know, I know. Many people love Gaiman, but I’ve read a few of his books and his writing is just not for me. Despite this, I always seem to pick-up a book by him every now and then. American Gods has been sitting on my shelf for years. After not liking The Ocean at the End of the Lane, I think I’m finally ready to admit defeat with this author. So, I’m going to let this one go.

Days before his release from prison, Shadow’s wife, Laura, dies in a mysterious car crash. Numbly, he makes his way back home. On the plane, he encounters the enigmatic Mr Wednesday, who claims to be a refugee from a distant war, a former god and the king of America.

Together they embark on a profoundly strange journey across the heart of the USA, whilst all around them a storm of preternatural and epic proportions threatens to break.

Scary, gripping and deeply unsettling, American Gods takes a long, hard look into the soul of America. You’ll be surprised by what – and who – it finds there…

15 thoughts on “Read it or Ditch it: American Gods”