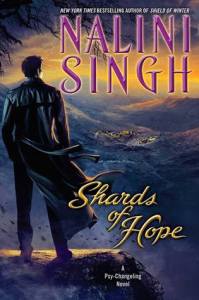 “Shards of Hope” is the second to last book in what Nalini Singh is calling the “first season” of her Psy-Changeling series. This is exciting since I’m ready for a change in scenery and characters. While I’m attached to most of the people we’ve met so far, I’m ready to stop constantly checking in with them.

The events in the previous book, “Shield of Winter”, caused a mass upheaval for the Psy. Silence, the strict system by which they lived their lives, has fallen. “Shards of Hope” takes place in the aftermath of this event. Many Psy are at a loss of how to move forward. No group is struggling more than the deadly squad of Psy, called Arrows. Without the strict guidance of Silence to guide them, many are afraid that they’ll lose control of their powers and hurt everyone around them. Aden, their leader, is more optimistic. He believes that his squad can live happy and normal lives outside of Silence without causing mass destruction.

In order to convince the squad of this, Aden must live by example and show that an Arrow breaking Silence protocol is ok. The person he wants most to help him is Zaira. She’s the one person on the squad who is considered the most lethal and unstable. For Aden, Zaira is willing to do anything. However, she’s unsure if she can let go of Silence completely without falling victim to the madness that drove her to kill her parents as a child.

I enjoyed “Shards of Hope” a little more than the previous book in the series. The constant point of view switches wasn’t as distracting here and felt like they were actually contributing to the overall plot. It was also refreshing to get introduced to some new characters. Especially the leader of the Black Seas pack.

My one huge issue with the book was how Aden’s powers were ultimately treated. Based on Singh’s MO I figured that she wouldn’t leave Aden’s powers as they seemed in the beginning, but I had hopes that she wouldn’t go big with them. I was really disappointed with the climax around this point. I liked in the beginning that he was considered a weak Psy, because it made it interesting that he was able to rise so far in the Arrow squad. It was exciting to see a hero from Singh that led, not by brute strength, but by intellect and loyalty. I also had loved that the Zaira was more powerful than Aden and it wasn’t an issue. It was just a fact. Unfortunately, Singh’s big reveal in the end negated that. To erase that “flaw” felt cheap and ultimately made him a less interesting character.

Despite this, I still enjoyed the book and would recommend checking it out if you’re fan of the series. I’m still up in the air on whether or not I’ll read the next book though. It’s going to be an ensemble one. While I enjoy a good ensemble book, but I’m not confident I’ll like one from Singh. After her characters have their happy endings, she tends to keep them in this protective bubble. It’s why I don’t like when she switches point of views to previous characters. So, I’m worried that an ensemble book from her would be dull since I’m unsure if she’ll raise the stakes enough to convince me that the characters are in any real danger or that she’ll add any interesting conflict to their relationships. So, I may end up skipping the next book and just waiting for the first book in the “new season” to come out.

Other Reviews for the Series:

13 thoughts on “Review: Shards of Hope by Nalini Singh”