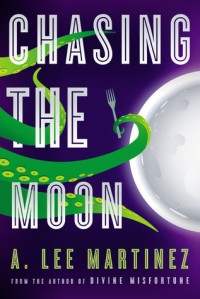 A. Lee Martinez is an author I don’t see floating around much, but has some really great stuff out there. His books are humorous fantasy and all standalones. This is great if you’re looking for something light to read that doesn’t mean diving into a new series.

In Chasing the Moon, we follow Diana as she moves into a new apartment and immediately discovers that the amazing flat comes with a hidden cost. Tenants of the building are burdened with some sort of supernatural job. Whether it’s hosting a bat creature in their body, being held prisoner by a tiny hellhound, or (in Diana’s case) having to share the flat with Vom; a monster who’s an unstoppable eating force and liable to devour her some day.

Chasing the Moon is the fourth book I’ve read by Martinez and I’m detecting a bit of a theme. While his novels are humorous they tend to have endings that are happy, but a little bittersweet.

The first part of the book is a little meandering, but I was enjoying myself too much to care that the plot didn’t seem to be going anywhere. It’s mostly Diana adjusting to all the new weirdness in her life, which was a lot of fun. Once the plot did get going, I almost missed the random craziness of Diana just dealing with Vom and all the other oddities in the apartment building.

I also really liked the theme of this one, which seems to focus on how actions can unintentionally cause massive chaos and being mindful of how you’re impacting those around you. It was interesting to watch the different interpretations of this based on the characters’ powers. Diana, who usually meant well, was continuously causing destruction and striving constantly to fix them. While some other characters caused chaos on a much larger scale and took a bit of a “c’est la vie” attitude about it. So it was interesting watching them, for one reason or another, slowly start to take some care.

If you haven’t checked anything out by this author yet, he’s well worth the try. Especially if you’re in the mood for something on the lighter side.

8 thoughts on “Review: Chasing the Moon by A. Lee Martinez”