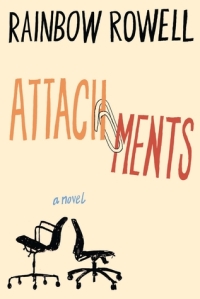 It feels really rare to come across a book that isn’t part of a series anymore. Attachments by Rainbow Rowell is one of those rarities.

1999. The year of Y2K craziness and before everyone had almost constant access to the internet via mobile devices. With technology taking off, most companies began scrambling to find ways to monitor their employees’ computer activity. Fear of slacking off at work and using company time for illicit things made many employers hire IT people to monitor the worker’s online activity.

Lincoln is one of those people. His job consists of three things; reading red flagged e-mails, fixing the occasional computer problem and being bored out of his mind. He hates his job. The late hours and reading other people’s e-mails makes him feel like a voyeuristic troll. Despite this, he can’t help but enjoy reading the red flagged e-mail exchanges between Jennifer (a paranoid editor) and Beth (a quick-witted movie critic), who both work for the local newspaper.

Attachments alternates between Lincoln’s point of view and the e-mails between Beth and Jennifer. It’s a pretty sweet story. I was a little leery about it at first, since Lincoln develops a thing for Beth through the emails. This could have easily ventured into creepy stalker territory. Luckily, I never got that vibe from Lincoln. His interest always just felt like a crush you’d get on an oblivious co-worker.

Lincoln was definitely the highlight of the book. Incredibly shy, he has a hard time branching out and meeting new people. He has his small group of friends and family that he keeps close, but otherwise isolates himself from the rest of the world. Throughout the novel, we get to see him build up his confidence and find direction in life.

In contrast to Lincoln, Beth is outgoing and doing a job she loves. We only get to know her through the e-mails with Jennifer though. At times this annoyed me. While I enjoyed the exchanges, I wanted to know more about Beth and Jennifer than what you could get through their correspondence. I would have liked to have seen a couple of chapters from their points of view interspersed throughout the novel.

All in all, this was a pretty fast and light read. I would recommend it to people who enjoy Jennifer Crusie and Meg Cabot’s “Boy” series.