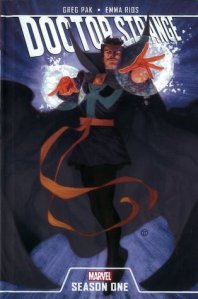 Doctor Strange: Season One was my first exposure to Doctor Strange. So, I went into this knowing next to nothing of the character. I picked it up primarily because it’s written by Greg Pak (X-treme X-men) and illustrated by Emma Rios (Pretty Deadly).

Doctor Strange: Season One is an origin story and, in all honesty, a pretty cliched one. Stephen Strange was a gifted surgeon until a car accident crushed his hands, leaving him incapable of operating. In a quest to gain back what he lost, Strange embarks on a spiritual quest that starts his life down a new path.

The main plot of this has been done a million times, but I still found myself enjoying the tale. Primarily because I really liked Strange. He has a great character arc and it was easy to empathize with him.  Especially when he came face-to-face with a gifted surgeon who hadn’t become jaded by success, like Strange had. One of my favorite moments was watching Strange interact with the surgeon; a compassionate person who Strange could’ve been, if he hadn’t let success go to his head.

Where this comic fails is with the female character. She offers very little to the plot and has all the personality of handbag here. This was a little disappointing since I’ve enjoyed Pak’s depictions of female characters in some of his other work.

All in all, this was a pretty solid origin story. I’m interested enough to read more of this character, especially since Jason Aaron (Wolverine and the X-men) is current working on it.

Even though I can’t stop picturing Dr. Orpheus when I think of Strange.